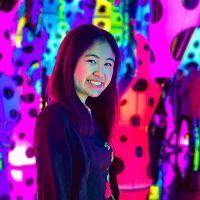 Rona Wang’s debut novel, YOU HAD ME AT HELLO WORLD, is forthcoming from Simon & Schuster Books for Young Children in 2022. She likes memes and doomscrolling. She is also an undergraduate at the Massachusetts Institute of Technology studying math and computer science, and she’s so excited to meet you!

Despite the abrupt end of her six-month relationship [is this a romantic relationship?] and the bizarre rupture in her only viable friendship, seventeen-year-old Charlie Walker is hell-bent on processing the turmoil and pressing forward with a life of strength and self-reliance. [you give us the protagonist’s goal immediately, which is awesome. I’d love to see more specifics–what is the rupture in this friendship? What does it mean to process the turmoil and press forward with a life of strength and self-reliance? Is she trying to make new friends, start a new romantic relationship, focus on school?]

That is, until her ex-best-friend alludes to a secret about the suicide of their mutual classmate, Alex—someone who has haunted Charlie for years because of the cruel words she said, the ones that seemingly pushed Alex over the edge. [it’s not clear if Charlie or Alex said the cruel words–I think it’s Charlie, since Alex committed suicide?] Determined to understand the truth, Charlie is compelled to not only reconnect with her prior network, but also reopen wounds that were previously sewn shut. [this is a compelling new conflict, but once again, I want to see more details. What does it mean to reconnect with her prior network (and I wasn’t aware she really had a “network”, it seems like she had her boyfriend and best friend)? Does she have to go back and grovel to her ex-boyfriend? What’s at stake here–what does it mean to reopen wounds that were previously sewn shut, and what does Charlie stand to lose? Since this seems to be a book where a lot of the conflict is interior, the stakes can totally be internal–but I’d still like to know what they are!]

While the explanations of her convoluted relationships unravel and the disturbing truth behind Alex’s suicide surfaces, Charlie spirals down a dangerous path—one that involves consuming copious amounts of alcohol, slitting her wrists, and becoming lost in anyone that will distract her. [I think it’s hard to follow this trajectory–Charlie’s clearly struggling, but I don’t understand why. I don’t know why the explanations of her convoluted relationships are unraveling (I still don’t know much about her relationships at all), and I don’t know what the disturbing truth about Alex is. So it’s hard for me to be invested in Charlie’s emotional journey.] But Charlie soon learns that her self-destructive behaviors can only manage the pain, not alleviate it. [how does she learn this?] As her mental health deteriorates and the suicidal thoughts intensify, Charlie must intervene before she relents her iron-willed mindset to become Beaufort, South Carolina’s second suicide victim in just three years. [how is she going to intervene? Books that are mostly about a character fighting with herself are totally fine, but usually, there are outside forces that push the character to overcome her internal conflict. I haven’t seen any elements that are going to spur Charlie to change.]

TITLE will appeal to fans of LOOKING FOR ALASKA, ALL THE BRIGHT PLACES, and GIRL IN PIECES. [love these comps!] I have an M.S. in Mental Health Counseling from the State University of STATE at CITY. Mental health is a passion of mine as I’m a Crisis Counselor for my local health department, and I volunteer in my free time for the Crisis Text Line.

[Thank you for sharing your query. I think your concept has a lot of potential and it reminds me of Laurie Halse Anderson’s books, which I devoured as a teen. Most of my comments are in the body, but overall, I’d just love to get a clearer picture of what happens in the novel. I don’t have a good sense of who Charlie is–she seems to be an angsty teen with some demons to fight, but I’d love to learn more about her interpersonal relationships, her family dynamic, and what she wants out of life. I’m not sure what’s important to Charlie or why she feels bad about Alex’s suicide. It’s also difficult for me to understand the plot or trajectory–I’m not sure what the big inciting incident is (give me more details about the bump-in with the ex best friend!) or why Charlie spirals. Also, who are the major players in this book–you mention an ex boyfriend and an ex best friend, but how big are their appearances? And who is Alex in relation to Charlie?

Queries are different than book jackets in that you don’t need to hold back in a query! Spoilers are totally fine.

Best of luck in Pitch Wars 🙂

The woods were infinitely more frightening at night. [this first line reads a little cliche to me.] As if towering pine trees with razor-sharp needles and deranged howls of rabid coyotes weren’t enough to terrorize me, I had to battle darkness as well. [I don’t know if this description is really necessary–it doesn’t tell us anything about the woods that we don’t already know] Under the pale moonlight, it was impossible to distinguish a fallen tree trunk from a cold, lifeless body. [nice creepy description!] In fact, the furthest the human eye could see in any direction was ten feet. Then, miles upon miles of remote East Coast darkness remained. There was no saying who or what lurked, loitered, or prowled from beyond. But the idea of predators stalking me through the wilderness in the dead of night had never prevented me from penetrating the mysterious terrain. Time and time again, the boundless woods vacuumed me in because no matter how much my skin crawled with trepidation, the reward on the other side always outweighed the risk. [good tension in this first paragraph]

Bleak silhouettes and murky shadows swallowed me as I crept through the timber. Dread snuck up my spine with an unexpected hoot of an owl. Out of sight, out of mind, I thought. But fear perseverated. [I don’t think this verb really fits a normal teen’s vocabulary] I clutched the straps of my backpack tighter and attuned my ears to the sound that beckoned me from beyond the blackness: the sedative [sedative or seductive?] whispers of the Atlantic Ocean.

Every time I heard the muffled roar of the waves, the words of my late grandmother pirouetted in my mind. Surrender your heart, Charlie, to the power of the ocean. Those sacred waves will guide you. For years, I hadn’t understood what she’d meant. But sometime amid the chaos, I’d had a revelation.

Between forceful tsunamis and catastrophic hurricanes, the planet’s sapphire heart [it took me a few seconds to realize the sapphire heart is the ocean. When I hear “heart”, I think of something at the core of the planet] had the power to obliterate everything in its path. Such natural disasters had devastated the globe, from Hurricane Katrina to the Tohoku Tsunami that had rocked Japan. But the ocean had another ability,

Thanks for sharing your first page! The tension and atmosphere are wonderfully dark and lonesome. You have some great word choice in here. I think the biggest changes you could consider are:

I hope this is helpful! Best of luck in Pitch Wars : )

Thank you, Rona, for the critique! We are showcasing three mentor critiques each day leading up to the Pitch Wars 2020 submission window, so make sure to read the other two critiques for today and come back tomorrow for more.