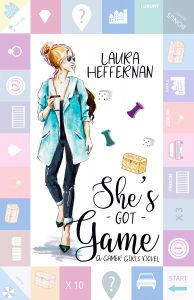 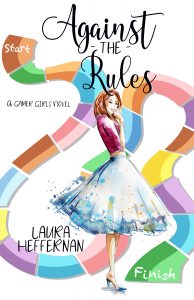 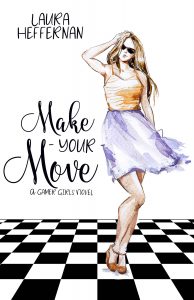 About SHE’S GOT GAME, book 1 in the GAMER GIRLS SERIES

Travel blogger Gwen Williams is about to live the dream—competing in the annual American Board Game Championship. She’s up against some stiff competition, namely legendary gamer and four-time champ Cody McKay. The seriously buff hottie and shameless flirt is going all-out to seduce her. That’s when Gwen lays her cards on the table: She never, ever mixes gaming with romance . . . until resisting Cody becomes a losing proposition.

As Gwen gives in to temptation, everything’s in play for a major heartache. With the rounds heating up and players eliminated, she knows she’s gambling a lot more than a seat at the final table in Vegas. But Cody’s kisses promise more than a fleeting romance. If she plays her cards right, Gwen just might walk off with the championship and the man of her dreams.

About AGAINST THE RULES, book 2 in the GAMER GIRLS SERIES

Holly has taken herself out of the dating game since breaking up with her cheating, thieving ex. She barely notices Marc, who comes into the game store every week, hoping to get her attention. Her friends insist it’s time to take on a new role, to leave Quiet Holly behind and embrace her inner flirt. And on paper, Marc’s great: cute, funny, and a hardcore gamer just like Holly is.

Then there’s Nathan. He’s everything twenty-eight-year-old Holly wants…except he’s also her friend’s father. Absolutely off-limits. But as she and Nathan playtest a new legacy game together, they’re growing closer. The game is complex and intriguing, and there’s no way to know how choices will pan out. What seems like a good idea could lead to disaster…or sweet victory. But in gaming, as in love, sometimes you have to roll the dice and take your chance . . .

About MAKE YOUR MOVE, book 3 in the GAMER GIRLS SERIES

At twenty-eight, Shannon has yet to fall in love. Which is fine, since she’d rather spend her evenings creating games than swiping right or going on awkward blind dates. Right now though, she has two little problems. First, she’s stuck for a new game idea. Second, the only candidate in her roommate search is Tyler, the gaming buddy who’s long had an unrequited crush on her.

It should be awkward. But when Tyler moves in, the situation doesn’t go at all the way Shannon expected. Between helping her deal with coworkers and fixing the bugs in her latest game, Tyler’s proving to be damn near perfect. Except for the fact that he’s falling for someone else. . .

Maybe Shannon has already forfeited her turn. Maybe she’s playing for nothing but heartache. But the best games have endings you can never predict . . . 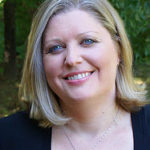 Laura Heffernan once broke up with her now-husband during a board game after realizing that he was ahead 96-3. She hasn’t played that particular game since. Her best friend still talks about the Great Uno Card Throwing Incident of 2003. Yet, somehow, Laura insists that she is incredibly gracious whether winning or losing. She lives in the northeast with her husband, new baby, and two furry little beasts.