CIRCLE OF JINN by Lori Goldstein . . . What Makes A Great Sequel, Book Release, and Giveaway!

Being Jinn is Azra’s new reality. As she grants wishes under the watchful eye of the Afrit council, she remains torn between her two worlds—human and Jinn. Soon, secrets spill. Zars are broken. Humans become pawns. And rumors of an uprising become real as the Afrit’s reach extends beyond the underground world of Janna.

Straddling the line becomes impossible. Aware of her unique abilities, Azra must not just face but embrace her destiny. But when the role she must play and those she must protect expand to include a circle of Jinn greater than her own, Azra will be forced to risk everything. A risk that means there’s everything to lose, and at the same time, everything to gain—for herself and her entire Jinn race.

In this dramatic sequel to Becoming Jinn, Azra’s story comes to a heartfelt and thrilling conclusion. 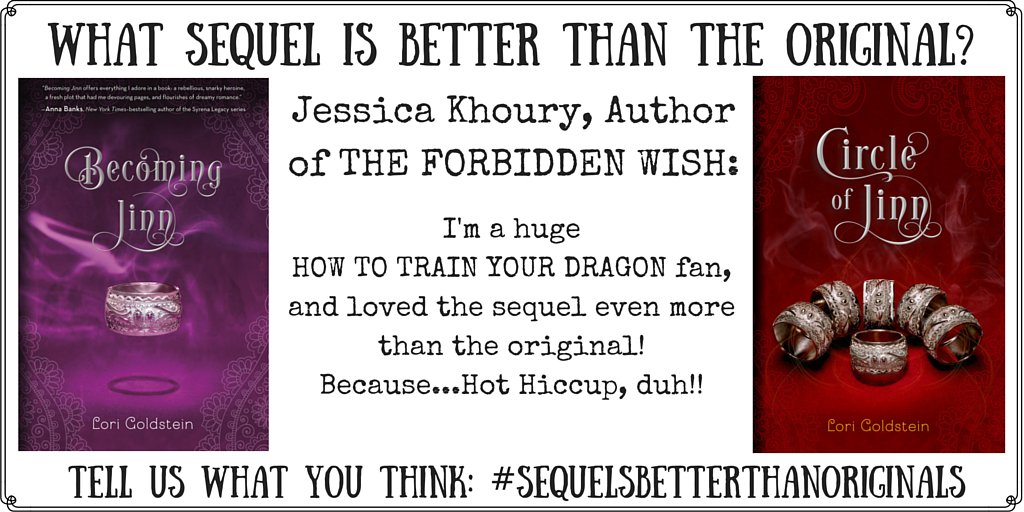 What Makes a Great Sequel?

Readers and moviegoers love sequels. Returning to characters we know and stories we love is like burrowing under a fuzzy blanket on a cold, snowy night. There’s great comfort in getting to visit old friends and follow them on a new adventure. And yet we settle in with expectations and hopes built from our experience with the first in the series. So inevitably the question is asked: But is it as good as the original?

Sequels have a lot to live up to. The first time you are exposed to something, it’s all shiny and new. Be it the first time you wear a swanky new dress or eat at just opened restaurant, the simple fact that you have never done this before—whatever this is—is exciting.

In the world of storytelling, the first glimpse of Diagon Alley or the Millennium Falcon can never be replicated. The unknown holds something special—there are no expectations. When you have no idea what to expect, it’s easier to be wowed. This is why so many sequels never *quite* live up to the originals. The characters, the story, the journey may be just as good or even better but it’s the lens through which we view this sequel—a lens that lacks the bonus points that “new” brings—that causes us to believe the sequel doesn’t quite measure up.

And yet, there are exceptions. There are sequels that take what we love about the first installment and build on it, giving us something that blows us away in spite of the bias we bring. They respect the world that’s familiar to us, but infuse the sequel with new energy, with deeper revelations about the characters without being gimmicky or repeating what was done in the original.

There are things that help you when writing a sequel and there are things that are obstacles in your path. With the world building largely set up in BECOMING JINN, the sequel, CIRCLE OF JINN, is able to take off at a faster pace and dive right into the twists and turns of the plot. A plus, for sure. And yet, book one has many twists, so that means there needs to be even more in book two. A minus. Or a challenge. I loved trying to one-up myself in the plotting of CIRCLE OF JINN. The characters introduced in book one become more fleshed out in book two. This is another plus. With backstory already known to the reader, the experiences for these characters in book two resonate much more quickly. I’m able to play with relationships, go down different paths, and explore more with everyone, a plus especially with a large ensemble cast as exists in the JINN series.

So if you ask me, is CIRCLE OF JINN as good as BECOMING JINN, my answer is. Yes, in many ways, I think it’s actually a better book. I’ve grown as a writer and storyteller. The threads laid out in book one are woven together in book two to what I think is satisfying and unexpected conclusion in book two. And yet . . . there’s something about the first time you experience Azra’s world and magic, the first time her snarky voice leaps from the page, the first time you meet Henry and Nate and Laila and Yasmin that cannot measure up to book two.

Duologies are becoming more popular in the YA world, and I think this is a great trend. A two-book series is able to create a tight storyline and each book does something the other cannot. Together, they are better than either on their own.

In honor of the May 17 release of CIRCLE OF JINN, I asked Pitch Wars mentors to weigh in on #SequelsBetterThanOriginals. Here’s what they have to say. What do you think? What sequels do you think are better than the originals?

Hop on Twitter, use the hashtag #SequelsBetterThanOriginals and tag me @loriagoldstein. I’d love to know what you think!

J.C. Nelson, adult mentor, author of The Reburialists: “For me, the definitive sequel is Terminator 2. Compare Terminator one, which is fun, but largely mindless, to Terminator 2. The second features an anti-hero who learns, grows, and sacrifices. Cut off the sappy voice over that was tacked on at the end and T2 is perfection – revisiting the world and showing us a new point of view.”

Gabrielle Byrne, MG mentor, repped by Catherine Drayton: “Maybe it’s the anticipation of waiting for book two to come out, or maybe it’s just that writing is like any skill and improves over time, but I often find the sequel to be better than the original. I loved the first Lockwood book, by Jonathan Stroud, for example, and then loved the second and third so much I took my nails down to the quick. The better I know the characters, the more I love them.”

Lee Malone, MG mentor, author of The Last Boy at St. Edith’s: “The Empire Strikes Back.”

PREORDER GIVEAWAY AVAILABLE UNTIL MAY 27, 2016!

The sequel to BECOMING JINN, which VOYA Magazine named one of the Best Science, Fiction, Fantasy or Horror of 2015 in a starred review, releases on May 17, 2016.

Advance praise for CIRCLE OF JINN from Booklist says “book two takes a sharp turn into high fantasy . . . Romance and wish granting take a backseat to friendship, political intrigue, and Azra’s maturation and ongoing discovery of her heritage. Fans of the first book should be satisfied by this conclusion.”

Preorder or buy a new copy of CIRCLE OF JINN by May 27, 2016, and you’ll automatically become a genie* yourself!

Every preorder, including signed preorders from Lori’s local indie, Porter Square Books (both books available for signed orders), will be mailed a signed bookmark, signed bookplate, and metallic bracelet tattoos.

But wait, there’s more! You’ll also be entered into the grand giveaway to win one of the exact shiny silver bangles featured on the cover of both Becoming Jinn and Circle of Jinn. GO HERE FOR DETAILS

* Swag includes temporary bracelet tattoos; the power to become a Jinn must already be inside you.

Lori Goldstein was born into an Italian-Irish family and raised in a small town on the New Jersey shore. A former journalist, she currently lives and writes outside of Boston. BECOMING JINN is her first novel.