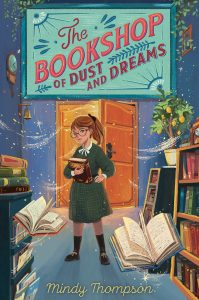 This moving story about a magical bookstore explores the way war can shape a family and is perfect for book lovers everywhere, especially fans of Pages & Co., Pax, and Wolf Hollow.

It’s 1944 Sutton, NY, and Poppy’s family owns and runs, Rhyme and Reason, a magical bookshop that caters to people from all different places and time periods. Though her world is ravaged by World War II, customers hail from the past and the future, infusing the shop with a delightful mix of ideas and experiences.

Poppy dreams of someday becoming shopkeeper like her father, though her older brother, Al, is technically next in line for the job. She knows all of the rules handed down from one generation of Bookseller to the next, especially their most important one: shopkeepers must never use the magic for themselves.

But then Al’s best friend is killed in the war and her brother wants to use the magic of the shop to save him. With her father in the hospital suffering from a mysterious illness, the only one standing between Al and the bookstore is Poppy. Caught between her love for her brother and loyalty to her family, she knows her brother’s actions could have devastating consequences that reach far beyond the bookshop as an insidious, growing Darkness looms. This decision is bigger than Poppy ever dreamed, and the fate of the bookshops hangs in the balance. Mindy Thompson writes fantastical stories for middle grade readers. Mindy holds a B.A. in creative writing and spent ten years working in public and middle school libraries. She began writing upper middle grade with her past students in mind and hopes to give them a place to find themselves in the books they read. Mindy lives with her sister-turned-roommate in Southern Idaho and spends too much time watching historical beauty tutorials online. She believes everyone has magic inside of themselves, they only need to have the courage to seek it.
Website | Goodreads