About this item: Signed copy of The Maiden’s Courage by Mary Lynne Gibbs. 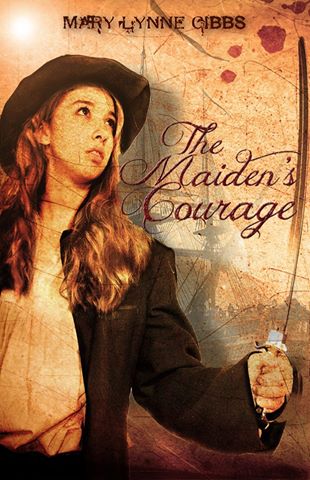 The best man on the pirate ship is a girl named Alex.Alex Gardner is the reluctant cabin boy on The Bloody Maiden, a ruthless pirate ship run by the charmingly evil Captain Montgomery. The crew is convinced she’s a boy, and she hopes it stays that way. She has to avenge the deaths of her mother and brother at the crew’s hands. All goes well until the ship takes a handsome captive. Could her feelings for him ruin her charade?Sebastian Whitley is a young man in love. He sails the sea in search of the beautiful girl he’s lost. When he’s captured by The Bloody Maiden, the annoying cabin boy saves his life – and makes it more difficult at the same time. His savior is actually a girl, and if Sebastian doesn’t keep quiet, it could mean both their deaths.Together, they have to thwart a mutiny, get revenge, and get off the ship before Alex’s secret is revealed. If not, it’s the plank for them both.

Mary Lynne Gibbs loves her creative life. She’s been writing for as long as she can remember, and has kept a dream journal nearly as long. Jericho Rising, the first of the Jericho books, is the product of one of her dreams. When she isn’t writing, Mary is a voracious reader. She enjoys exploring her new home state of Kentucky – especially horseback riding and knitting. In Michigan, Mary was heavily involved in the independent film community, having appeared in several web series and films, as well as murder mystery dinner theatre shows. She’s taking a hiatus from acting to settle in, and focus on her writing.