What would  happen if women ruled the world and men were nothing but their slaves and  playthings? To some, it might be heaven on earth. To a woman named Jericho, that  couldn’t be further from the truth. In post-World War III, small town MI, the  reluctant leader of the resistance movement must fight to preserve the freedom  of all in her care – male and female alike. She’s torn between love and duty,  family and friends. With the violent and insane self proclaimed High Priestess  after her, and traitors around every corner, Jericho’s life is far from heavenly.

In the year 2050, war erupted around the entire globe. Our ancestors called it “World War III” years before it ever started, but we called it something else—“The First War.” It was the first war to involve every nation on earth. Why? No one really knows…we just knew the aftermath.

Nearly every nation suffered profound loss, their landscapes bathed in blood. Many smaller towns throughout the United States experienced a mass exodus as the survivors moved to more populated areas seeking security, shelter, and food. A few brave souls chose to stay behind and struggled to maintain their ways of life.

In rural Lower Michigan, one disturbed woman took advantage of these circumstances. She made it her mission to twist her little part of the world into what she considered her own utopia; a perfect world in her eyes, where women ruled and men were nothing but slaves, pets, and playthings who had no rights and no voice. In this new world, hate replaced love, and fear replaced peace.

A new Dark Age began as the self proclaimed “High Priestess” ruled over all. If anyone dared to oppose her, they were taken into custody by her female guards and their wills broken with torture—or even death.

Five years after it began, one young woman decided that enough was enough. This woman believed that everyone—male and female alike—deserved the freedom that was stolen after that first war. One night, along with a small band of like-minded friends, this young woman led a rebellion that would ultimately become the Second War. This rebellion set off a chain of events that would alter history once more.

I was that young woman. My name is Jericho. This is my story. 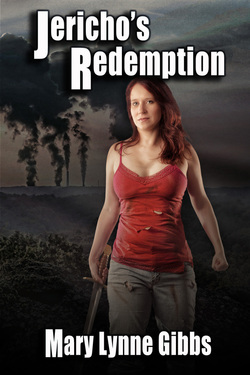 The battle is over, but the war has just begun. Jericho returns to the Obsidian camp, only  to learn that her sister Candace destroyed it as part of a plot to dismantle the resistance movement that brought down their mother, the High Priestess. The rest of the resistance blames Jericho for the deaths of their friends, but that’s the  least of her worries. Not only does Jericho now have to right the wrongs that her sister has done, she must contend with a few guests to the camp who bring  secrets with them that will change her life forever. Either she’ll redeem herself in the eyes of her comrades, or she’ll die trying.

Mary Lynne Gibbs loves her creative life. She’s been writing for as long as she can remember, and has kept a dream journal nearly as long. Jericho Rising, the first of the Jericho books, is the product of one of her dreams. When she isn’t writing, Mary is a voracious reader. She enjoys exploring her new home state of Kentucky – especially horseback riding and knitting. In Michigan, Mary was heavily involved in the independent film community, having appeared in several web series and films, as well as murder mystery dinner theatre shows. She’s taking a hiatus from acting to settle in, and focus on her writing.