A SHIMMER OF ANGELS by Lisa M. Basso releases today … giveaways and more!

Tuesday, 29 January 2013  |  Posted by Brenda Drake
I’m thrilled to host an exciting new book on my blog today, A SHIMMER OF ANGELS by Lisa M. Basso. This book is so hot you can’t pass it up! I have a fun interview with bad boy Kade and giveaways. Sign up on the Rafflecopter below to win some awesome book swag during the blog tour. There will be daily winners!

Also, answer the question at the end of Kade’s interview for a chance to win one of three books (paper or kindle book, your choice). 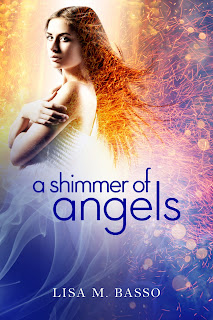 MONTH9BOOKS ANNOUNCES A SHIMMER OF ANGELS: THE PERFECT MIX OF REAL LIFE, PSYCHIATRY and FANTASY in a YA NOVEL
Psychiatry, fantasy and real life come together in A Shimmer of Angels, as a young girl struggles with identity, secrets, and confronting her greatest fears. A Shimmer of Angels is for anyone who has ever felt like an outsider, or perhaps has felt like giving up entirely. It touches on themes of suicide, ostracism and emotional pain. The author, personally exposed to suicide through the death of a beloved family member, will donate a percentage of sales of this novel to a suicide prevention and outreach program in San Francisco, California.
Month9Books,a publisher of speculative fiction for teens and tweens, announces the release of A SHIMMER OF ANGELS, a debut young adult title from Lisa M. Basso.
Sixteen-year-old Rayna sees angels, and has the medication and weekly therapy sessions to prove it. Now, in remission, Rayna starts fresh at a new school, lands a new job, and desperately tries for normalcy. She ignores signs that she may be slipping into the world she has tried so hard to climb out of. But these days, it’s more than just hallucinations that keep Rayna up at night. Students are dying, and she may be the only one who can stop it. Can she keep her job, her sanity, and her friends from dying at the hands of angels she can’t admit to seeing?
Author of THE IRON WITCH, Karen Mahoney, says, “A SHIMMER OF ANGELS has a courageous heroine who finds herself in the middle of two gorgeous angels, a fascinating world, and a story that builds to an exciting climax – I’ll be looking forward to more from Lisa M. Basso!”

Lisa M. Basso was born and raised in San Francisco, California. She is a lover of books, video games, animals, and baking (not baking with animals though). As a child she would crawl into worlds of her own creation and get lost for hours. Her love for YA fiction started with a simple school reading assignment: S.E. Hinton’s The Outsiders. When not reading or writing she can usually be found at home with The Best Boyfriend that Ever Lived ™ and her two darling (and sometimes evil) cats, Kitties A and B. Lisa M. Basso is available for quotes, signings, video or podcast appearances, and all opportunities relative to A SHIMMER OF ANGELS.

A SLITHER OF HOPE, Book 2 in the ANGEL SIGHT series will be available from Month9Books in February 2014!

Sign up on the Rafflecopter for a chance to win!

So, Kade, we all love the bad boy and can’t get enough of their evil ways, tell me what attracts you to Rayna?
What do you like most about Rayna?
What do you like least about Rayna?
What’s your relationship with Cam? What do you think about him?
Is there something in your past that makes you so deliciously bad? What’s the story?
What was your greatest success?
What’s the worst thing you’ve done to get what you want and why?
Most embarrassing thing that ever happened to you?
We all have secrets, what’s  your deepest darkest one?..
Who annoys you the most?
What makes you happy?
What do you care about most in the world?
How far will you go to get your own way?
Rayna would be surprised to know what about you? Something you would never share to the world, but just might share with the right person?

Kade’s wings are midnight-black feathers with a rainbow-like sheen of an oil slick. In the moonlight they shine like stars in the sky. Go to the Month9Books blog and show your wings for more chances to win A SHIMMER OF ANGELS books and swag!

In the comments of this post tell me what Kade likes most about Rayna for a chance to win one of three books (paper/kindle ebook). I’ll pull winners on February 6.

You can find A SHIMMER OF ANGELS at Barnesandnoble.com, Amazon.com, or any other places where fantastic books are sold.