First off, a HUGE thanks to Brenda for setting up #PitMad. Couldn’t be here without her!

I participated in the June 6th #PitMad earlier this year and received three agent likes (which I didn’t realize was pretty good!). While two of them rejected me after sending the query, one requested my full manuscript in less than 24 hours, which I thought was the norm at the time. However, I didn’t hear back from this agent for months, even after nudging, so I thought it was a pass.

Thus, I decided to join the September 5th #PitMad, expecting it to go the same way. I think I cried for about 20 minutes straight when I ended up with 19 agent likes across two pitches, about five of whom were dream agents.

I do think my experience with this was a bit untraditional though. One of the dream agents that liked my pitch wasn’t participating in #PitMad per se, but he ended up requesting my query anyway because one of his former interns saw my pitch and sent it to him. Without that referral, I might never have queried Dr. Uwe Stender at Triada US because I didn’t think he’d actually be interested in my novel. I’m happy to say now that he and his amazing assistant Elle Thompson now represent me!

Here’s the pitch that Uwe liked:

EAST ASIAN: GRISHAVERSE x EMBER IN THE ASHES. A desperate blacksmith with a dangerous secret and a monk trained to collect ghosts pair up to resurrect the only girl who can stop an onslaught of magic-hungry demons. But a ruthless clan stands in their way. #YA #F #POC #PitMad

Thanks again to Brenda and everyone else for helping writers out! 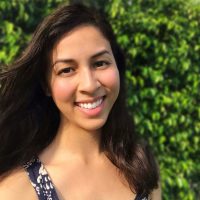 Helena Hoayun is a Guyanese American of Indian and Chinese descent who writes fantasy and science fiction for children, teens, and adults. Born in New York, she moved to hot and sunny Florida, where she can be found binge-playing various kinds of video games and catching up on all things nerdy. Currently, she works as a copy editor at a legal publishing company for education leaders.