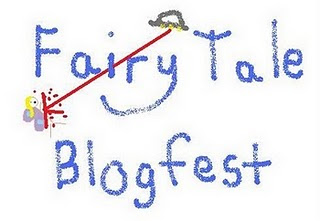 Emily White over at Stepping into Fantasy is hosting a Fairy Tale Blogfest check it out here and go read all the other participants’ entries: http://steppingintofantasy.blogspot.com/2010/08/fairy-tale-blogfestcontest.html

So when searching for a tale to use for the Fairy Tale Blogfest nothing was inspiring me. I almost decided to give up. I searched and searched and came across this: http://en.wikipedia.org/wiki/Mother_Goose_Tales
It says that Bluebeard is a fairy tale so I decided to go with it.

Bluebeard is a tale about a terrible husband who’s wives keep disappearing. He marries a neighbor girl and forbids her from going into his secret room. While he’s out of the country she finds his magical key that opens the secret room. When her sister, Anne, visits she convinces her to go into the room. When she opens it she finds blood, gore, and his missing wives bodies. She locks the room up but blood remains on the key and Bluebeard finds out she went into his room. Before he kills her, she tricks him into delaying and her brothers come and rescue her. They kill Bluebeard. End of story.

So here’s my modern tale of Bluebeard. Since I only decided to join the blogfest today, I fear it might not be that good because I rushed it. Plus, since this is for fun, I decided to play with a tense I’m not use to. I can’t wait to read the rest of the entries. Thanks for stopping by!
“I can’t believe you’re finally here,” Anne says, grabbing a stuffed mushroom off the plate.
“Jet lag is an understatement,” I go. “I had to stay up all night to get that stupid report done before I left.”
“Girl, I don’t care how tired you are. We are so going to shut this town down tonight.”
Her friends bore me. They’re all small town and back woodsy. I watch and wonder as Anne chatters to her new friends. This little town stuff really suits her. I smile. She’s happy in her life with Brian.
“So who’s the eye candy over there,” I say, raising the martini glass to my lips and taking a long sip.
“That’s Jack Bluebeard,” Anne goes. “You should avoid him. He’s been married several. . .”
I’m already up from my seat before she finishes that last bit. My approach to his table is total vixen-like and his eyes follow me until I bridge the distance between us.
“Hi, I’m Fatima. May I join you?”
The intensity in his dark eyes captivates me, and I slide into the chair beside him. That slow, sexy grin ensnarls me and before long, I’m lost in conversation with him. He’s cute, and according to Anne, he’s the richest man in town. What’s not to love?
That was the night I met Bluebeard–as his friends like to call him. It was a whirlwind romance. Less than three months and we were married. A day after the honeymoon my nightmare began.
I went from a career girl to his slave, quitting my job and friends. Let’s see, his dinner must be ready precisely at six, his under shorts and bed sheets ironed before used, and his insatiable desires satisfied each night, or he’s a beast to live with. Oh, and I’m forbidden from entering his secret room. No wonder one wife went off with a man she met on twitter, another wife went home to her mother, and his third wife joined the Peace Corps.
I glance at the clock and exhale. Bluebeard’s meeting with his accountant just started. My husband works from home so I’m never alone. The moment’s freedom feels good.
Anne knocks at the side door. I let her in.
“Hey,” she goes, looking me up and down. “You look awful.”
“That’s why you’re here. We only have an hour.”
She grabs the suitcase in the middle of the kitchen. “Well, let’s hurry then.”
I follow her to the door and stop. “Shit, I forgot my purse up stairs. I’ll be right back.”
“Just hurry, already.”
I’m about to take the first step on the stairs and there’s Bluebeards office keys on the carpet. I pick them up and rush up the staircase. I know it’s not the greatest idea, but I’m curious about what the jerk keeps in that damn room. I slide the key into the lock, and it clicks open. My shaky hand pushes the heavy door wider. Air rushes out in a gust. A moldy stench punches my face and I gag. There’s barely any light coming from the heavily draped windows.
The sight of them makes me scream. I hear Anne scramble up the stairs. The bodies are like white ghosts hanging from hooks on the wall, dust floating around them like smoke. Rusty stains streak their naked paleness. They all resemble me, long and slender with large breast. Heads tilted to one side, their frozen eyes watch me.
Anne gasps from behind me. “They’re Jack Bluebeard’s wives.”
I stand there unable to move.
Anne grabs my arm. “Let’s get out of here. The dude is seriously unstable.”
The front door opens and slams below us.
I pull from her and walk across the floor leaving a trail in the plaster dust.
She follows.
“They’re so beautiful,” I say and run my finger down the cold cheek of one.
His footfalls announce his arrival before he actually stops in the door frame.
“What are you doing in here?” his angry voice reaches out to me.
I spin to face him. “What is all this?”
His shoulders sag. “It’s my art.”
“Why is there blood all over them?” I turn back, my eyes finding the statues once again.
“It’s not blood. It’s from the roof damage a few years back.”
“I don’t understand. Why?”
He moves into the room. Anne scurries over to the window.
“When they left me I was devastated. Capturing their imagines in sculpture was therapeutic for me. Fatima, I know I’m controlling and possessive but I want to change. I don’t have a meeting with my accountant. I have one with a therapist. I forgot my medical card, so I came back for it. Please don’t leave me. Give me another chance. I promise–”
“Maybe since you have more money than God,” Anne begins. “You could get a damn maid to iron your underwear.”
“Stay out of this, Anne.”
“I’ll do anything,” he pleads.
In this dim light, the shadows touch all the beautiful sharp edges of his face. His blue eyes hold me, begging me to love him. I glance at the victims of his love. Their lips are all the same, corners up, bottom lip plump. They’re perfect except for the rust that stains them. His love ruined them. He’s locked them away for no one to see. Kept for only his greed. Do people really change? Bluebeard’s eyes are watching me but he never truly sees me.
“I’m sorry it’s just too late,” I say and push past him. “Come on, Anne.”

The clicks of Anne’s heels follow me through the hallway and down the stairs. I grab the handle of my suitcase and drag it after me.